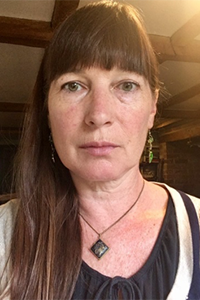 We Belong to the Streets is a coming-of-age novel about working-class East End children from diverse backgrounds: the Anglo-Indian daughter of an ayah, the son of a Jewish immigrant, the daughter of a local prostitute, and the son of an Irish dockworker. The action shifts between the nineteenth century and the present day, beginning as a newly arrived modern immigrant finds four hidden talismans. Each links to a Victorian child, establishing their world and identity; the story then follows friendships and rivalries as they enter the workforce in the 1880s. Their distinctive voices build into a multi-stranded narrative, connecting past and present through surviving East End buildings and streets.My research examines narrative approaches to working-class communities in historic and contemporary writing. I will consider how authorial point of view, focalization, use of multi-voiced and multi-stranded narratives, and the impact of varied ethnicities and culture influenced readers of late Victorian children and positions consumers of neo-Victorian YA novels today. I will then embody this research in a new YA novel, reflecting its conclusions in both subject matter and narrative form.Taken together, the critical and creative elements interrogate past and present cultural constructions of working-class identity and respond to them with a YA novel that fills a gap in current children’s literature. Avoiding tokenistic representation, it is grounded in the varied communities of the Victorian East End, and mirrors the restricted life opportunities of many modern communities. It follows the rarely told stories of ground-breaking class action and some of the first successful strikes, the Bryant and May matchgirls (1888) and London dockers (1889). Its portrayal of Victorian society and events is based on detailed and historically accurate research, making the novel both a literary and historical resource, giving it a wide potential readership both inside and outside the classroom.