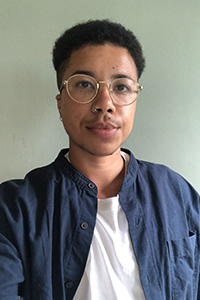 Responding To The Archive: Mobilisation, Myth and Memory

This practice-based study will use painting and drawing to interrogate Britain’s response to Black Power organising in the English-speaking Caribbean (1967-1976), documented in The National Archives Foreign and Commonwealth Office (FCO) collections.


There are 72 records labelled ‘BLACK POWER’ (1967-1976), within the FCO collections. They are a series of internal communications and intelligence reports documenting Britain’s surveillance of Black Power organising across the English-speaking Caribbean. Many of these records became publicly available within the last decade, and in some cases only in 2020.

This research will take an interdisciplinary approach to theory, led by practice: regarding memory, archives and cultural theory from a postcolonial standpoint, with an inherently black queer perspective. Through a process of ‘visual unarchiving’ this study will build upon a framework of key concepts including Hanchard (2008) and Scott’s (2008) juxtaposition of ‘black memory’ and ‘state memory’. This research will respond specifically to the state archive, questioning what knowledge can be gained from state records that may not be present elsewhere.

I aim to create a body of work that reflects a black radical artistic tradition which uses painting, drawing and text as a means of engaging in critical dialogues situated outside of state memory and remembering. I will experiment with the use of painting, drawing and text to question what the FCO records may reveal about the British government’s response to Black Power organising, that is otherwise obscured in state memory.