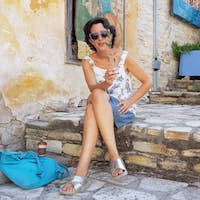 Developing the disappearing art of Lefkaritika into a community pedagogy, in order to witness the silences in marginalised women’s lives.

‘Lefkaritika’, a style of lacemaking unique to rural Cyprus, was so admired by Leonardo Da Vinci that following a visit in 1491, he bought a piece for the altar cloth of the Milan Cathedral, which inspired the tablecloth in his painting The Last Supper (Özyiğit, 2020, p.47). In 2009, recognising both the craft’s international significance and the immediate threat to its survival, the United Nations inscribed it onto the ‘Representative List of Intangible Cultural Heritage of Humanity’ (UNESCO, 2009). Defined as a ‘social and artistic practice’, Lefkaritika is now ‘under such stress that it may disappear’ because knowledge primarily lies in the ageing hands and memories of the few remaining lacemakers (Kokko, Kaipainen, 2015 p.10). In 2014, approximately 250 women worked in Lefkara alone, the village which gives the lace its name (UNESCO, 2014) and where my paternal family lived. Today there are barely 40 scattered across the island (Interview with Margarita, Castledine, 2020).


During my Creative Writing MA, despite the pandemic, I completed two Erasmus funded residencies in Lefkara (Grampus Heritage Training Ltd). Adopting an ethnographic approach (Pink, 2013) and supported by my career as a community arts practitioner, I began to explore interdisciplinary representations of silence in traumatised women’s testimony, especially where silence acts as a protective mechanism (Nórby, 2005). Through qualitative interviews with villagers and visual analysis of archive material, multi-layered silences in and around the lacemakers’ lives were revealed. Just like the deliberate creation of holes, a  defining feature of Lefkaritika, these silences are often intentional; conscious gaps embedded into the fabric of a story. Building on emerging feminist theory, which positions silence as a rhetoric of the deliberately unspoken (Glenn, 2004), I intend to develop a pedagogy that witnesses silences in vulnerable women’s lives, including how gaps may be heard, shared and ultimately encourage voice.