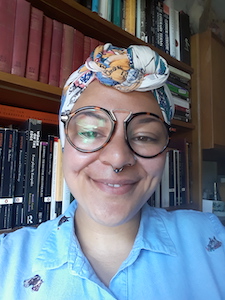 The project will provide a necessary reappraisal of feminist approaches to ancient Greek mythology, utilising an innovative approach which will consider both ancient texts and modern receptions. Previous feminist scholarship has often excluded key sites of oppression, considering gender at the expense of intersecting aspects of identity including race, class, sexuality, age and (dis)ability. By interrogating the dynamic between knowledge production, theory and literary practice, I aim to re-interpret Greek mythology through an intersectional lens to demonstrate the significance of modern marginalised identities. The project will examine how knowledge is translated between academic scholarship and reception, and further, how receptions - especially those within popular culture - reflect back and shape how mythology is understood. I will be concentrate on selected issues in relation to a wider exploration of intersectionality to manage the scope of the project.

Classical mythology is enjoying a vogue in reception, especially in popular culture and ‘feminist’ retellings (for example, Madeline Miller’s Circe) and yet it has been neglected in intersectional feminist scholarship. For example, a 2015 Intersectionality in Antiquity workshop featured only one paper concerning mythology. A lack of intersectional scholarship is leading to receptions which may intend to question problematic aspects of Greek mythology, but instead perpetuate harmful ideology through misunderstanding of the sources. The project will address the problems of elitism and gatekeeping in classics and popular culture studies that drives this lack of engagement from both sides. My thesis will build upon my own work to date, which has included an exploration of scholars’ responsibilities and the importance of academic analysis of ‘low-brow’ forms of reception (Hinds 2019). I will seek to work with partner organisations like Culture Mile, and AHRC funded projects such as the Being Human festival, to build engagement with the research through events such as discussions or exhibitions.