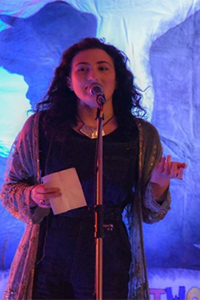 Radical Art during WWII: Conscientious Objection and Utopianism in the work of Don Treacher

This research is an exploration of the art of conscientious objectors through the lens of a previously undocumented body of artwork by Don Treacher who was also my great-uncle.  Treacher was a Conscientious Objector (CO) who lived in Brighton during WWII. He was imprisoned as a CO, enlisted into the army, was threatened with court-martial, andcommitted suicide in 1942 aged 20. During the war he created dozens of paintings in bright paint or black ink and notebooks as well as numerous letters, cuttings and collages. He declared in letters that these reflected utopian and anti-war sentiment, and the depictions include: surreal war scenes, people-processing machines, and satirical social comment. This research will explore the political implications of his designs and how they wereaffected by his experience with legal and art institutions in the wider context of conscientious objection. There has been limited scholarship on the art of Conscientious Objectors during WWII. As CO artists during WWII were mostly religious, created basic prison drawings, or were accepted into the War Artists Advisory Committee (WAAC),Treacher’s work represents a rare opportunity to gain historical insight into undocumented and imprisoned artists during the war. Ultimately, the research will use his artwork as a lens through which to focus on the wider context of COs along with its varied visual language and political belief. The research will open up new local histories in Brighton and offer a new perspective on art and conscientious objection in Britain.