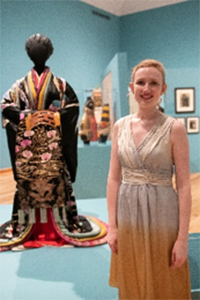 Les Ballets 1933 was a short-lived dance company that gave twenty performances of six ballets in the Théâtre de Champs Elysées in Paris and at the Savoy Theatre in London in the year 1933. Its director was Boris Kochno, formerly the secretary and scenarist for Serge Diaghilev, who had led the Ballets Russes until his death in 1929, and the choreographer George Balanchine. The venture can therefore be seen as a brief interlude between the Paris years of the larger company and the subsequent migration and dispersal of the group, mainly to the United States and South America.  Unusually, Edward James, patron of the arts and  within Surrealist and avant-garde circles, saved the sets, props, costumes and ephemera from four of the six ballets, initially storing them at Monkton House, West Sussex before the collection was acquired through the Edward James Foundation by RPMBH in 1971. The collection, now cared for by the Royal Pavilion and Museums Brighton and Hove, forms the material basis for new primary research into a remarkable set of objects by designers and artists including André Derain, Christian Berard, Pavel Tschelitchew, Oliver Messel and Caspar Neher.The project will shed new light and understanding of how Les Ballets 1933 contributed to avantgarde performance as it moved from East to West in interwar Europe, from Russia to Paris, London and eventually the USA. It will examine the changed circumstances for the production, performance and reception of Les Ballets 1933 between Paris and London. It will go on to consider how the work of Les Ballets 1933, especially its London setting, can be presented to a contemporary public through display at the Brighton Museum and through performance.