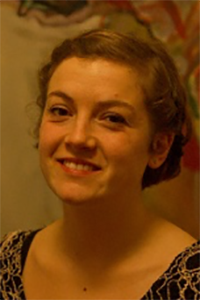 An Artist Explorer in Mathematics: Investigating Spatial and Sculptural Elements in the Communication of Topology

This research uses a synthesis of concepts from art, mathematics and linguistic pragmatics to explore the part played by physicality in the communication of mathematics. The aim is observe, as an outsider, how one mathematician explains their work to another, and so to present insights that can open up exchange across the borders of the discipline. There has been little study of communication within mathematics from a pragmatic perspective to date, and engagement from artists has been very limited. However, since Lakoff and Núñez published their controversial new view of mathematics, where Mathematics Comes from (WMCF, 2000), a debate has opened up around embodied mind theories that offers an opportunity for some exciting new work. I intend to join that conversation, using sculptural practice to investigate selection, interpretation and abstraction in mathematics communication, and its relationship to body andenvironment.  When presenting, mathematicians typically use gestures, ad-hoc diagrams and surprisingly visceral metaphorical speech, each playing a part alongside formal notations. I will observe communicative events at conferences, drawing upon the field of linguistic pragmatics to produce a written analysis, with a focus on the role of physicality. I will expand upon this analysis in a sculptural practice that will critically examine how matter might be said to convey meaning. I have chosen topology because of the role that diagrams play, and its divergence from everyday physical experience. As a sculptor with a sincere fascination with mathematics, I place myself as an 'Artist Explorer', maintaining an outsider position to avoid taking on the assumptions that facilitate the work of practitioners.  My work will be published on my established blog, infiltratemathematics.wordpress.com, through which I hope to build upon the dialogues that I am creating with mathematicians, artists and linguists, and to reach as wide an audience as possible, with a new perspective for mathematicians and non-mathematicians alike.