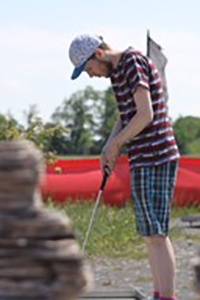 The Creation of Resistant Environments for Real-Time Improvisation with Electronics as a Compositional Strategy.

My research is concerned with the relationship between liveness in electronic music and the recorded object. This is explored through the creation of environments for live musical improvisation in which control of the sonic output is distributed and partial. In doing so, I seek to foreground questions of liveness and performativity in electronic music, and to interrogate the processes of transformation that take place as this live work becomes studio work.

Central to the construction of resistance in my music is a preoccupation with control, authorship, predeterminacy and indeterminacy. These ideas arise from long-standing concerns regarding performance practice in electronic music, as summarised by Deniz Peters; '… to hear is to hear something. It is also, usually, to hear someone. Where and who is this someone in electronic music, even of the performed sort? Can a performer (or composer) be heard in it, in cases where there is a delayed or otherwise altered performance, or no (human) performance? Or can a performance be heard without a performer? Or, given both performer and performance, can both actually be heard in the music, instead of being somewhat arbitrary or removed from it?'. Resistant improvisational environments make these concerns explicit, dramatizing the distribution of agency that takes place when a human performer interacts with an electronic system that is operating in accordance with its own musical agenda. The intention is to take advantage of the lack of clarity regarding control, agency and the causal link between action and sound that characterises much electronic music, thereby turning it into a compelling, rather than distancing, musical situation.