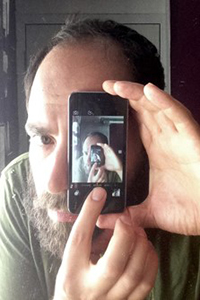 Visual surveillance in the City of London (1994- present day). Discipline, control and the materiality of digital visual media

This research project charts the development of visual surveillance technologies in the City of London from 1994 to the present day. I conduct an analysis of the devices themselves, arguing that self-governance and self-surveillance are now practiced and instilled through the materiality of consumer devices, such as smart phones. Using the Square Mile’s notoriety as the most surveilled public space in the world, this project utilises specific locations within the City of London to outline the models of discipline and control which have accompanied the change in visual surveillancetechnologies. The shift from surveillance to self-surveillance is crucial to our contemporary understanding of control societies. Previously urban surveillance has been synonymous with CCTV cameras and Michel Foucault’s writing on discipline; the Panopticon being the most obvious yet prescient example. However I argue that visual media itself has started to move from a mechanism of topdown discipline to one of personally embedded Deleuzian control. As yet, no research has criticallyexplored this shift by way of visual technologies and self-surveillance. The study’s start date of 1994 marks the publication of the Home Office report ‘CCTV: Looking out for you’, after which many cities rapidly embraced analogue closed-circuit television. In this same year, Kodak and Apple produced their first digital camera for the consumer market. Through charting the development of both CCTV and mobile, consumer visual recording devices, this project traces how surveillance has developed from being explained as a measure of safety to one which is embedded by default into everyday personal technology.The project is arranged in six chapters: Lenses; Screens; Mobility; Tagging; Interface;Networking and Systems. Throughout this thesis, I argue that the ways in which we understand our relationship to power can be challenged and radically transformed by examining the technological structure of digital visual media.