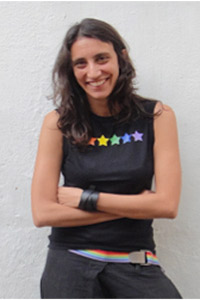 
My project explores the audiovisual tactics of resistance that feminist and queer filmmakers have developed in order to question normative media representations of gender and to articulate alternatives for themselves.

I will examine feminist and queer film cultures looking at their formal-aesthetic approaches, their innovative contributions to cinema and their cultural and political significance in contemporary society. Committed to the subversion of conventional film structure as a tactic to challenge the sexist ideologies reflected in mainstream cinema, early feminist filmmakers created a unique idiom, combining critical, aesthetic and social theory, autobiography, avantgarde formalism and sub-cultural style. Since the early 1970s, this counter-cultural idiom has influenced several generations of filmmakers addressing questions of identity politics. Analysing the work of filmmakers of different ʻgenerationsʼ, I intend to examine the aesthetic trajectories that connect early feminist filmmakers to their contemporary counterparts, as well as the practices that are emerging within current cultural contexts (for example, the development of cyberfeminist ethics and aesthetics). While acknowledging the distinction between feminist and queer film practices, my research focuses on what they have in common: interventionist aesthetics informed by theory and leveraged to develop creative responses to socio-political issues. Building on my experience as a filmmaker, I will produce a film in dialogue with queer and feminist filmmaking traditions, to further investigate the effectiveness of formal strategies of subversion in generating new self-representations and discourses. The film is conceived as a mixed-media, experimental film that reembodies the queer subject, while acknowledging the normative boundaries in which society still constrains it.