Home » For and about students » Events: Conferences, Workshops, Lectures, Talks » The Poetics of Reticence: Emily Dickinson and Her Contemporaries

The Poetics of Reticence: Emily Dickinson and Her Contemporaries 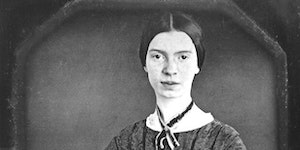 The Poetics of Reticence: Emily Dickinson and Her Contemporaries

Eve Grubin discusses Emily Dickinson’s poems and their characteristic style against the backdrop of poetry written by other American women during Dickinson’s time.

While American literary culture in the 19th century was saturated with poetry written by women, only Emily Dickinson’s poems are known today.  In this paper, I explore a number of questions: why hasn’t the work of Dickinson’s contemporaries resonated for modern readers? To what extent did cultural expectations determine the form and content of the poetry of women in this period? And how does an understanding of the context in which Dickinson wrote offer insight into her invention of a unique poetics of reticence? Drawing on the Eccles Centre’s archives and bibliography of early American women writers, we will examine these questions and look carefully at Dickinson’s radical reticent style, a precursor to modernism and contemporary avant-garde poetry.

Eve Grubin’s book of poems Morning Prayer was published by the Sheep Meadow Press, and her poems have appeared in American and UK publications such as The New Republic, American Poetry Review, Poetry International, PN Review, and Poetry Review. Her essays have appeared in books such as The Veil: Women Writers on Their History, Lore and Politics (U of CA Press 2009) and Jean Valentine: This World Company (U of Mich Press, 2012). She teaches at NYU in London, she is a tutor at the Poetry School, and she is the poet in residence at the London School of Jewish Studies. She has received a TECHNE AHRC Doctoral Training Partnership Scholarship through Kingston University for her research on Emily Dickinson and the Poetics of Reticence.